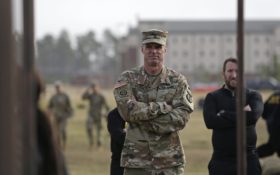 A former Army Green Beret who admitted divulging military secrets to Russia over a 15-year period is scheduled to be sentenced on espionage charges.

Peter Dzibinski Debbins, 46, of Gainesville, Virginia, pleaded guilty in November to a federal Espionage Act charge in U.S. District Court in Alexandria. He will be sentenced on Friday.

Debbins’ relationship with Russian intelligence dates to 1996 and spanned 15 years. It began when he was an ROTC student at the University of Minnesota and on a visit to Russia gave a handler there the names of four Catholic nuns he had visited after a Russian intelligence agent told him the nuns were involved in cult activity.

Debbins’ lawyer is pressing for a lighter sentence. The lawyer argues that Debbins caused minimal damage and that Russian agents had blackmailed Debbins by threatening to expose his same-sex attractions in a military era in which “don’t ask, don’t tell” was still in force.

Prosecutors are seeking a 17-year term. They say Debbins never told the FBI anything about being blackmailed. They say his original explanation of his motive is far more likely, that he was bitter about his time in the Army and that he considered himself a “loyal son of Russia.”