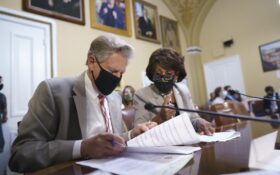 Hours before a nationwide eviction moratorium is set to expire, Congress raced Friday to try to extend the ban in a longshot effort to prevent millions of Americans of being forced from their homes during a COVID-19 surge.

A House panel convened to consider emergency legislation to extend the ban, which expires Saturday, through Dec. 31. But approving an extension would be a steep climb in the narrowly-split Congress.

More than 3.6 million Americans are at risk of eviction, and House Speaker Nancy Pelosi implored colleagues to act, calling it a “moral imperative” to not only protect renters but also the landlords who are owed compensation.

Congress must “meet the needs of the American people: both the families unable to make rent and those to whom the rent is to be paid,” Pelosi said in a letter to colleagues.

President Joe Biden announced Thursday the administration would allow the ban on evictions to expire. The White House argued its hands are tied after the Supreme Court signaled the moratorium would only be extended until the end of the month.

Not all lawmakers are on board with an extension, and the House is preparing to leave Friday for a scheduled recess. The Senate is also considering emergency legislation but passage in the 50-50 may be even more difficult.

“Is it emergency enough that you’re going to stop families from being put on the street?” Waters said as the Rules committee met to consider the bill. “What the hell is going to happen to these children?”

But Rep. Cathy McMorris Rogers, of Washington, the top Republican on another panel handling the issue, said the Democrats’ bill was rushed.

“This is not the way to legislate,” she said.

Congress pushed nearly $47 billion to the states earlier during the COVID crisis to shore up landlords and renters as workplaces shut down and many people were suddenly left out of work.

But lawmakers said state governments have been slow to distribute the money in the new program. On Friday they said only some $3 billion has been spent.

By the end of March, 6.4 million American households were behind on their rent, according to the Department of Housing and Urban Development.

As of July 5, roughly 3.6 million people in the U.S. said they faced eviction in the next two months, according to the U.S. Census Bureau’s Household Pulse Survey.

The ban was initially put in place to prevent further spread of COVID-19 by people put out on the streets and into shelters.

The White House said Biden would have liked to extend the federal eviction moratorium due to spread of the highly contagious delta variant of the coronavirus. Instead, Biden called on Congress to do so.

“Given the recent spread of the delta variant, including among those Americans both most likely to face evictions and lacking vaccinations, President Biden would have strongly supported a decision by the CDC to further extend this eviction moratorium to protect renters at this moment of heightened vulnerability,” the White House said in a statement. “Unfortunately, the Supreme Court has made clear that this option is no longer available.”

The court mustered a bare 5-4 majority last month, to allow the eviction ban to continue through the end of July. One of those in the majority, Justice Brett Kavanaugh, made clear he would block any additional extensions unless there was “clear and specific congressional authorization.”

Aides to Senate Majority Leader Chuck Schumer and Sen. Sherrod Brown, the chairman of the Senate Committee on Banking, Housing and Urban Affairs, said the two are working on legislation to extend the moratorium and are asking Republicans not to block it.

Waters spoke with Treasury Secretary Janet Yellen and urged her to push states to distribute some $47 billion in funding the Congress had already approved for housing aid during the coronavirus pandemic but which has been slow to reach renters and landlords.

Congress has allocated nearly $47 billion in assistance that is supposed to go to help tenants pay off months of back rent.

But so far, only about $3 billion of the first tranche of $25 billion has been distributed through June by states and localities. Some states like New York have distributed almost nothing, while several have only approved a few million dollars.

“The public health necessity of extended protections for renters is obvious,” said Diane Yentel, executive director of the National Low Income Housing Coalition. “If federal court cases made a broad extension impossible, the Biden administration should implement all possible alternatives, including a more limited moratorium on federally backed properties.”

Gene Sperling, who is charged with overseeing implementation of Biden’s $1.9 trillion coronavirus rescue package, said it was key that states and local authorities speed up the rental assistance distribution.

But landlords, who have opposed the moratorium and challenged it repeatedly in court, were against any extension. They have argued the focus should be on speeding up the distribution of rental assistance.

The National Apartment Association and several others this week filed a federal lawsuit asking for $26 billion in damages due to the impact of the moratorium.

“Any extension of the eviction moratorium equates to an unfunded government mandate that forces housing providers to deliver a costly service without compensation and saddles renters with insurmountable debt,” association president and CEO Bob Pinnegar said, adding that the current crisis highlights the need for more affordable housing.