Everything you need to know about Trump-Kim summit... - The Horn News 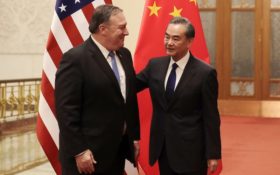 The United States and its Asian allies worked Thursday to clarify President Donald Trump’s summit with Kim Jong Un when he announced that the U.S. will halt military exercises with South Korea. Trump’s top diplomat insisted the president hadn’t backed down from his firm line on North Korea’s nukes, but that this was part of a negotiation.

“We’re going to get denuclearization,” Pompeo said in the South Korean capital. “Only then will there be relief from the sanctions.”

Pompeo flew from Seoul to China’s capital, Beijing, later Thursday for a meeting with President Xi Jinping, whose country is believed to wield considerable influence with North Korea as its chief ally and economic lifeline.

“I also want to thank China and President Xi for his role in helping bring North Korea to the negotiating table,” Pompeo said in a briefing with reporters.

Pompeo thanked Beijing for its continuing efforts to help achieve the “complete, verifiable and irreversible denuclearization of North Korea.” He said both sides had agreed that sanctions would not be eased until that’s achieved.

Chinese Foreign Minister Wang Yi, in remarks at the start of his meeting with Pompeo, described the Singapore summit as of “great historic significance” that could lead to “enduring peace.” Wang said the U.S. should continue to “work through China.”

Pompeo said there was still a risk that denuclearization might not be achieved and added there more work to be done by Beijing and Washington.

“We believe that the sanctions themselves are not the end,” Geng said.

China has been praised by Trump for ramping up economic pressure on the North that the U.S. believes helped coax Kim to the negotiating table.

On the joint U.S.-South Korea drills, Pompeo emphasized a key caveat: If the North Korean dictator stops negotiating in good faith, the “war games” will be back on.

The words of reassurance from Pompeo came as diplomacy continued at an intense pace after Tuesday’s summit in Singapore, the first between a sitting American president and North Korea’s leader in six decades of hostility. In the village of Panmunjom along the North-South border, the rival Koreas on Thursday held their first high-level military talks since 2007, focused on reducing tensions across their heavily fortified border.

South Korea’s leader cast the summit’s outcome as positive during a short meeting with Pompeo at the Blue House, South Korea’s presidential palace. President Moon Jae-in, an avowed supporter of engagement with North Korea, called it “a truly historic feat” that had “moved us from the era of hostility towards the era of dialogue, of peace and prosperity.”

The summit in Singapore did mark a reduction in tensions — Kim is now promising to work toward a denuclearized Korean Peninsula and state media heralded the meeting as victorious, with photos of Kim standing side-by-side with Trump on the world stage splashed across newspapers in Pyongyang.

With the Trump-Kim summit concluded, the baton was being passed to lower-level U.S. and North Korean officials, who Pompeo said would likely resume meeting as early as the next week to hash out details of a disarmament deal, sure to be a complex and contentious process.

He said the U.S. was hopeful North Korea would take “major” disarmament steps before the end of Trump’s first term in office, which concludes in January 2021.

In the brief, four-point joint statement signed at the summit, North Korea committed “to work toward complete denuclearization of the Korean Peninsula.”

The document signed by the leaders at their historic summit Tuesday also says they will join efforts “to build a lasting and stable peace regime” on the Korean Peninsula.