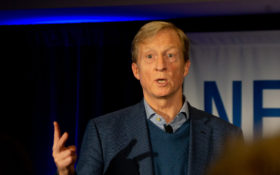 There’s another billionaire running for president.

He’s a progressive activist who made a fortune as a hedge fund manager, says he’s joining the Democratic primary campaign – and is ready to spend $100 million of his own dough to get elected. And he’s already getting attacked by his own party!

But his fellow Democrats will soon find out that Steyer already does a great job at ruining himself.

“I like Tom,” Sen. Bernie Sanders, Sen. I-V.T. said on MSNBC. “He is a good guy, he’s a friend of mine, but I’m not a great fan of billionaires getting involved in the political process.”

Sen. Elizabeth Warren, D-M.A. was even colder, blasting Steyer without even saying his name.

“The Democratic primary should not be decided by billionaires, whether they’re funding Super PACs or funding themselves,” she tweeted.

If they sound nervous, it’s likely because Steyer is aiming to capture the same extremist wing of the party that Warren and Sanders aim for.

They shouldn’t worry much: Steyer has little chance of winning even the nomination, much less the election. Even people on the left – including many who share Steyer’s agenda – have called him charmless and lacking in charisma.

Just about the only thing he does have on his side is money!

Steyer is best known for spending $50 million on ads aimed at pressuring Democrats into impeaching Trump as part of his failed “Need to Impeach” campaign.

And he’s come up empty.

Well… not quite empty.

The campaign gathered a mailing list of some 8 million angry Democrats. They thought they were signing up to help aid an impeachment… but instead, they’re now spam targets for Steyer’s joke of a presidential campaign.

Last year, Sen. Kamala Harris’, D-Calif. advisor Sean Clegg predicated that’s how Steyer would use the list – and denounced it at the time as a “bait and switch.”

But given that the campaign has gone nowhere, that means Steyer essentially spent $50 million on an email list — you have to wonder how he became a billionaire! He certainly may not be one for much longer if he keeps spending like that on his doomed campaign.

If recent history is any indication, he’ll be spending money like a drunken sailor out on shore leave.

He pumped $123 million into Democratic candidates for the House midterms. The party won the majority, but his personal track record was much spottier: Forbes said just 59 percent of Steyer-backed House candidates prevailed.

He’s done so poorly over the years that in many ways getting backed by Steyer is almost a kiss of death.

Just ask Hillary Clinton, a prime recipient of his support – and his money – in 2016.

In recent elections, Steyer has spent BIG on Democratic candidates and causes and come up well short each time.

But that’s not how Steyer saw it.

He delivered an almost comical assessment of the results in the days after the 2016 election.

“Did we get the president we want? Absolutely not. Did we get a majority of clean energy supporters in the Senate? No,” Steyer told Reuters. “But in terms of what we did, and the strategy we took, we wouldn’t do anything differently.”

Steyer’s rivals can probably breathe a little easier. He’s proof positive that a big wallet doesn’t always mean big results… especially if he decides he won’t do anything differently.