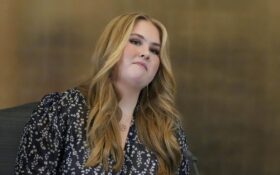 The teenage heir to the Dutch throne has been forced to give up on Amsterdam’s student life and live instead at her parents’ palace, the latest indication of just how much of a threat organized crime poses to Dutch society.

Queen Maxima said her eldest daughter, Amalia, “can’t leave home” and that it has “enormous consequences for her life.”

A visibly emotional Maxima said at the end of a state visit to Sweden on Thursday that the 18-year-old princess “doesn’t live in Amsterdam and can’t really go out.” She said that despite the security concerns, the princess is continuing her studies.

The Queen’s words offered rare insight into the sense of unease felt by royal house. It’s also indicative of the fear shared by the Dutch and others across Europe that criminal gangs involved in the lucrative drug trade are fanning. The Dutch justice minister last week hosted a meeting at which six nations pledged to step up cooperation in the fight against organized crime.

That meeting came after security around Belgium’s justice minister, Vincent Van Quickenborne, was beefed up following the arrest of four Dutch men in the Netherlands on suspicion of a plot to kidnap him.

Belgium and the Netherlands are home to the ports of Antwerp and Rotterdam, two key hubs for networks trafficking huge amounts of cocaine into Europe.

Another example underscoring the gravity of the gang threat was a move by Dutch prosecutors this week to add terrorism to charges that a suspect faces in the slaying of popular crime reporter Peter R. de Vries who was gunned down last year. Prosecutors said the suspect posted on social media grisly video he recorded of De Vries after he was shot in a downtown Amsterdam street to amplify the impact.

Amalia, 18, is studying Politics, Psychology, Law and Economics at Amsterdam University and was supposed to be living in a house with other students in the heart of the city’s historic canal network.

Instead, she is still at home in nearby The Hague, her mother said. “She doesn’t have a student life,” Maxima said.

Prime Minister Mark Rutte, who reportedly also has had his personal security beefed up amid threats, called it “terrible news” for Amalia.

“I can’t say anything about threats and security measures. I can assure you that everybody in government who knows about this and is involved is doing their utmost to ensure she is safe,” he told reporters in The Hague.

Dutch daily De Telegraaf reported last month that security for Amalia and Rutte had been tightened amid fears of criminal plots targeting them. Police and intelligence officials declined to comment on the report.

Justie Minister Dilan Yeşilgöz-Zegerius tweeted that “measures have been taken around the Crown Princess’ security” but said she could not elaborate on “concrete threats or specific security measures.”

“It is terrible that this is necessary. In particular for the Crown Princess herself,” she added.