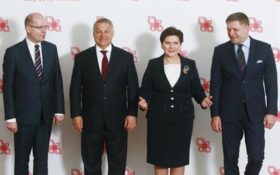 Leaders from Central Europe said Tuesday they reject a European Union policy that calls for all member states to take in refugees, protesting suggestions that the level of their compliance could be linked to the availability of EU funds to them.

A meeting in Warsaw of the so-called Visegrad Group brought together Poland’s Prime Minister Beata Szydlo and her counterparts from Hungary, Slovakia and the Czech Republic. Their talks included the EU’s migrant policies and its 2015 plan of sharing some 160,000 refugees among member states to ease the pressure on Greece and Italy.

The EU recently warned of financial consequences to those who do not comply.

Central European leaders said they reject the relocation plan and will not yield under the financial pressure, which they called an attempt at blackmail. Poland’s government is citing security concerns among the reasons behind its refusal to take in people.

Szydlo said at a joint news conference that EU’s migration policy should result from a true compromise among member states that would take into account especially sensitive issues.

Hungarian Prime Minister Viktor Orban said his country was further sealing its borders and tightening regulations to block access to any more migrants, saying that serves the security of all of Europe.

The Visegrad Group aspires to have a greater role in EU policies while at the same time makes a point of criticizing the bloc’s decisions.