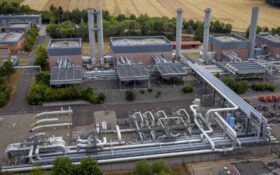 Denmark’s maritime authority said Monday that a gas leak had been observed in a pipeline leading from Russia to Europe underneath the Baltic Sea that is dangerous to shipping traffic.

The operator of Nord Stream 2 confirmed that a leak in the pipeline had been detected southeast of the Danish island Bornholm in the Baltic Sea.

Although the pipeline isn’t used to import gas, it is nevertheless filled, dpa reported.

A spokesman for Nord Stream 2 said a loss of pressure had been detected in a tube early Monday, and the responsible marine authorities in Germany, Denmark, Sweden, Finland and Russia were immediately informed, dpa reported.

Germany’s economy ministry said earlier on Monday in Berlin that they had “no clarity about the causes and the exact facts of the matter.”

“We are currently in an exchange with the authorities concerned in order to clarify the facts,” the ministry said in a statement.

The pipeline was already complete when German Chancellor Olaf Scholz suspended the certification of Nord Stream 2 on the eve of Russia’s invasion of Ukraine in February, after Russia formally recognized two Russian-backed breakaway regions in eastern Ukraine.

Germany has been heavily reliant on natural gas supplies from Russia, but since Moscow launched its war in Ukraine on Feb. 24, Berlin has been trying to look for other sources of energy.

The leak comes a day before the inauguration of a new pipeline, Baltic Pipe, which will bring Norwegian gas through Denmark to Poland. The Norwegian gas is meant to have an important role in replacing Russian gas.