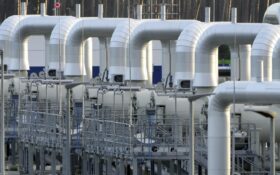 European Union countries agreed Monday that all natural gas storage in the 27-nation bloc should be topped up to at least 80% capacity for next winter as they prepare for the possibility of Russia further reducing deliveries.

The EU is trying to slash its use of Russian energy amid the Kremlin’s war in Ukraine and find other sources.

A ban on imports of Russian coal will start in August, and an embargo on most oil from Russia will be phased in over the coming eight months.

Meanwhile, Moscow is disrupting natural gas deliveries, a fuel used to power factories and generate electricity that the EU didn’t include in its own sanctions for fear of seriously harming the European economy. Before the war, the bloc got about 40% of its natural gas from Russia.

Moscow has reduced gas supplies to several EU countries, including heavy importers Germany and Italy, and cut off deliveries to other members, such as Poland and Finland.

The EU Council adopted the gas storage regulation Monday after the European Commission made a proposal in March. The regulation also says underground gas storage on EU soil will need to be filled to 90% capacity before the 2023-24 winter.

Heads of state and government agreed last week during a summit in Brussels to step up preparations for further gas cuts from Russia and to keep searching for other suppliers. The EU already has increased deliveries from the United States, Norway, Algeria and Azerbaijan.

Some EU members don’t have storage facilities, so the regulation provides that they should store 15% of their annual national gas consumption in other member countries, allowing them access to reserves in other EU nations.

Cyprus, Malta and Ireland, which are not directly connected with the gas system of other members, got an exemption, the council said, adding that filling obligations will stop at the end of December 2025.