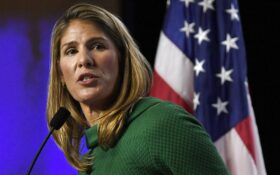 The House Ethics Committee has cleared U.S. Rep. Lori Trahan following an investigation into allegations that the Massachusetts Democrat accepted excessive campaign contributions and reported them as personal loans even though they may not have been sourced from her personal funds.

The investigation focused on allegations that Trahan’s husband, David Trahan, deposited funds into a joint checking account that she then used to make $300,000 in loans to her campaign during the 2018 election.

Lawyers representing the member of Congress had argued that the funds were her personal funds because the couple signed a premarital agreement under which Trahan and her husband have equal rights to the management of all marital property.

“Accordingly, the loans were sourced from Representative Trahan’s personal funds, not excessive contributions from her husband,” the committee added. “For this reason, the Committee did not find that Representative Trahan acted in violation of House Rules, laws, regulations, or other standards of conduct with respect to campaign contribution limits.”

“The respected House Ethics Committee — made up of Democrats and Republicans — investigated this matter thoroughly and has now unanimously confirmed what I’ve always maintained: that my campaign acted ethically and that these baseless accusations were just politics,” Trahan said in a written statement Thursday.

Last year, a report from the Office of Congressional Ethics — an independent watchdog that make recommendations to the committee — looked at the allegations. That report said that, while the money didn’t appear to have originated from Trahan’s personal funds, the campaign repeatedly reported them as personal loans.

“When Dave and I got married in 2007, we made a deal. And we actually wrote it down. All of the income that each of us earned would be our marital property” she wrote. “We didn’t distinguish.”

Trahan narrowly edged out Dan Koh by 145 votes in a 10-candidate Democratic primary in 2018 for the state’s 3rd Congressional District, which includes Lowell. She went on to win the general election.