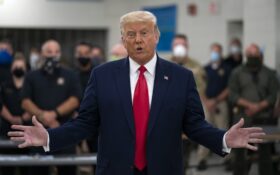 Former President Donald Trump and his “Make America Great Again” movement are being blamed for the disappointing 2022 midterm election results by moderate Republicans in the mainstream media.

And the multi-prong political ambush comes just hours before Trump is widely expected to announce his 2024 presidential campaign.

It’s the first serious attack on the 45th president and his American First supporters since the 2016 presidential primary by the establishment — and the attacks have been growing.

Murdoch went so far as to tell Trump directly that he should expect zero support for his upcoming presidential run, according to The Guardian.

Trump’s former Vice President Mike Pence has been on a whirlwind media tour criticizing his old boss and blaming Trump for the Jan. 6 Capitol Riot.

Trump’s “reckless words had endangered my family and all those serving at the Capitol,” Pence wrote in a recent book. The former vice president is expected to challenge Trump for the 2024 Republican presidential nomination.

On Capitol Hill, establishment Republicans are reportedly working with Democratic Party leaders to box out America First and conservative U.S. congress members from choosing the next Speaker of the House — even if it means voting for a Democrat to lead.

Check out this RINO trash: in response to a direct question about who gets his vote for Speaker, @RepBobGood leaves the door open to the possibility of voting for a democrat. pic.twitter.com/ElMJlnrzJT

“In a sense, we have three political parties in the House: the Democrats, the Republicans, and the Freedom Caucus,” Conservative Partnership Institute President Ed Corrigan warned Breitbart News.

Corrigan called for a member of the “America First” House Freedom Caucus to be the next Speaker of the House.

“More than any time in history, the HFC [House Freedom Caucus] has extraordinary power to negotiate a leadership that empowers all members, especially conservatives, and restores the deliberative House that existed for 200 years,” Corrigan said.

But in the U.S. Senate, Democrat and Senate Majority Leader Chuck Schumer said he was meeting with Senate Minority Leader Mitch McConnell on a plan to work together and “ditch” those MAGA Republicans.

“I’m going to say to the Republicans in the Senate who are not the MAGA Republicans, stop letting them lead your party,” Schumer told CNN on Sunday. “Work with us to get things done. I intend to sit down with Mitch McConnell and express that.”

“I intend to sit down with him and say we should be working together,” Schumer said.

“You’re not going to get the extremists in your party to work with anybody, but the rest of us can work together and get some real things done for the American people.”

Unbowed, Trump and other MAGA Republicans have shot back at establishment attacks and blamed McConnell for the GOP’s disappointing performance.

Trump is reportedly prepared to launch his third campaign for the White House on Tuesday night during a rally at his Florida Mar-a-Lago estate at 9:00 p.m. Eastern. According to the Associated Press, the former president has the backing of the No. 3 House Republican, Rep. Elise Stefanik of New York

Another presidential campaign is a remarkable turn for any former president. Just one president in U.S. history has been elected to two nonconsecutive terms: Grover Cleveland in 1884 and 1892.

Trump, eager to return to the spotlight, is hoping to stave off a long list of potential challengers, including Florida Gov. Ron DeSantis, who cruised to reelection last week and is now being urged by the establishment to run for president as well.

Trump has already begun to lash out at DeSantis publicly and on Tuesday, the Florida governor shot back, dismissing the criticism as “noise.”

“At the end of the day, I would just tell people to go check out the scoreboard from last Tuesday night,” DeSantis told reporters.