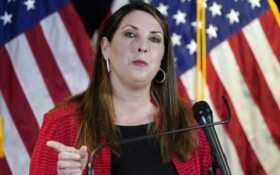 Ronna Romney McDaniel, the Republican National Committee chair, is campaigning for a fourth term as the GOP’s top fundraiser.

McDaniel first became RNC chair in 2017, around the time of former President Donald Trump’s inauguration. In her three terms, she’s presided over three underwhelming elections for the GOP.

Now, some Republicans are questioning whether to blame the poor results on McDaniel or on Trump.

The Trump acolytes blame McDaniel for the lack of a red wave, and they view her as entrenched in her role.

The “Never Trump” Republicans blame Trump, and they fault McDaniel for becoming too close to the former president.

“The reality is that every time Donald Trump says ‘JUMP,’ Ronna asks ‘HOW HIGH,’” a Tennessee committeeman reportedly said in an email. He encouraged the RNC to “move on” from Trump. “In order to do that we must also move on from Ronna McDaniel,” he added.

McDaniel has pointed out the lack of likely alternatives.

For instance, Dhillon has already worked as vice chair of the California GOP, with little to show for it. Plus, Dhillon currently employs some staffers from failed campaigns in the midterm election.

“I am sick of the scapegoating — ‘This person didn’t do enough, and I am going to attack them,’” McDaniel reportedly said this month a podcast. “I am hearing that come towards me, and I think it is really unfounded and unfair, especially from someone on the committee in a leadership role who is now throwing darts, when she could have asked really productive questions throughout and she didn’t.”

Trump himself has endorsed McDaniel in the past, but he’s refused to endorse anyone in this race.

“Well, I can honestly say I like both of them. I mean, I get along with both of them. I haven’t taken a stance, you know. Let them fight it out,” Trump said on a podcast earlier this month.

MyPillow CEO Mike Lindell is also challenging McDaniel, but he remains an outsider.

The committee is set to vote by secret ballot in Dana Point, California, on Jan. 27.

The RNC chair needs to win support from more than half of the committee’s 168 voting members, and McDaniel reportedly earned commitments from more than 100 of them.

In other words, McDaniel remains the clear frontrunner.

The liberal media appears to be sensationalizing this contest. The Washington Post ran a headline called, “Bitter RNC chair race roiled by questions of Trump loyalty.”

Trump today refuses to endorse Ronna McDaniel for re-election as RNC Chair: “I like both of them .. Let them fight it out.” pic.twitter.com/ceSrjWhGjH