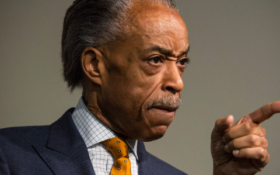 Ever since ESPN become a political soapbox for their hosts, their ratings have been on a rapid decline.

Facing backlash from conservative viewers after months of SportsCenter host Jemele Hill’s attacks against President Donald Trump, the company announced they’re finally doing something… but they only managed to make things worse.

ESPN formally suspended Hill for two weeks for her nasty social media attacks after she called the president a “white supremacist” and called on viewers to support players kneeling during the anthem.

But the suspension backfired. For Trump voters, the move wasn’t enough. Conservatives have demanded that Hill be fired, and pointed out that a two week suspension is little more than a vacation.

On the left, liberals are mad that their actions have consequences — and it has Rev. Al Sharpton calling for a boycott of the network.

ESPN's suspension of Jemele Hill is an outrage and should NOT go unanswered. ESPN and advertisers will hear from us!

Trump himself weighed in on social media regarding Hill’s actions —

With Jemele Hill at the mike, it is no wonder ESPN ratings have "tanked," in fact, tanked so badly it is the talk of the industry!

The president is right.

Disney CEO Bob Iger has admitted that he’s concerned about ratings because half the network’s advertising deals are set to expire in 2019, causing serious concerns among investors.

Hardly the time to make enemies among viewers — and such weak attempts to restore order has further alienated viewers from both sides of the political aisle.

Windy Dees, a professor of Sports Administration at the University of Miami, told Variety the network bosses have grown increasingly nervous.

“They have to be. They’re hemorrhaging viewers left and right, ” Dees said. “They are in a state of decline. So any situation that happens in the future, whether it’s the Jemele Hill situation or something else, is going to have its impact magnified.”

Do you think ESPN did enough to punish Jemele Hill?