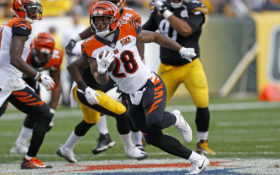 Ratings are declining and revenue is dwindling, so ESPN may do the unthinkable — dropping the NFL completely once their contract is up.

This is bad news for NFL players and owners that depend upon the cable giant for billions in ad revenue.

Growth is no longer attainable for the self-proclaimed sports entertainment empire. Workforce layoffs have been ongoing and more are reportedly on the way.

Since 1987, ESPN has been a staple in the NFL franchise. Some would say that the NFL has been the backbone of ESPN’s existence, and the biggest source of money flow for the network.

Is it completely outlandish to entertain the possibility that the network would forgo the rights to Monday Night Football after the expiration of the eight-year deal in 2021? Critics say, think again!

Obviously, subscribers would be upset over losing their ability to watch NFL games through the network, but the cable giant will be able to use negotiation tactics to keep the subscriber numbers as high as they possibly can.

NFL players and owners would not be a part of those negotiations, though. NFL teams will suffer the greatest impact from losing ESPN as an ally–if they cannot get on TV, there will be no more money shoveling in.

Since the network signed a $15.2 billion contract for their current Monday Night Football deal, key executives have taken note that they were not buying the schedule of their previous MNF package. Unlike before, MNF no longer holds the best or top games of the week.

Sunday Night Football has taken the slot of holding the best games of the week, and now Fox and CBS have become the host of the more desirable match-ups.

Ironically, CBS and Fox pay a lower fee for their rights to NFL games than ESPN.

The NFL gives ESPN access to footage outside of the games — aka the rights to air their NFL films and other NFL-related opportunities. Experts estimates that around 15 to 20% of the cost for ESPN’s rights to MNF games is attributed to those additional rights and privileges.

By the time that ESPN has to decide whether it is in their best interest to renew their contact with the NFL, social media sites could become their biggest competitor yet. Digital players have the ability to reach a bigger network and would not be as demanding as a cable network.

Dropping the NFL from their network could free up a lot of money and air out the negative energy.

Letting their rights to MNF expire would free up billions of dollars for the network allowing them to target another franchise. It could also give the cable giant a chance to get away from the negative politics of the game.