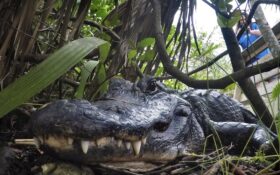 Police and conservation officers were searching Friday for an unknown number of young crocodiles that escaped earlier in the week from a large breeding farm in South Africa.

The crocodiles are suspected to have entered the nearby Breede River after escaping Wednesday morning near the town of Bonnievale in Western Cape province, about 180 kilometers (111 miles) east of Cape Town.

So far, 27 of the reptiles have been recaptured and another seven had to be euthanized, Cape Nature conservation spokeswoman Petro van Rhyn said. Another six were spotted but evaded capture.

The commercial breeding farm contains about 5,000 crocodiles, van Rhyn said, and a big part of the problem is that recovery teams aren’t certain how many escaped. They are waiting for the owner of the farm to give them an accurate count.

The crocodiles are thought to be between 1.2 and 1.5 meters long, according to Cape Nature.

Conservation officers have been using cages with food bait inside to try and capture the crocodiles, but that hasn’t proved to be very successful because the river is full of fish, van Rhyn said.

Police and Cape Nature officers are concentrating on an area as far as five kilometers (three miles) upstream and five kilometers downstream of the escape point but don’t believe the crocodiles will have moved very far.

Van Rhyn said residents of the area should be watchful but shouldn’t panic. Crocodiles are nocturnal and generally shy, she said, it’s highly unlikely to see one on the streets of Bonnievale.

She said it was not a good idea to go swimming in the river there, though.