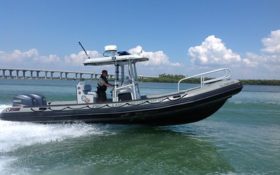 A boat that started doing doughnuts after hitting a wave in the Potomac River tossed the driver overboard.

A passing motorist helped get the man out of the water and brought him to shore, D.C. Fire said in a post on Twitter. The man was not injured.

Authorities were eventually able to get a hold of the empty boat after it continued circling on the waves.