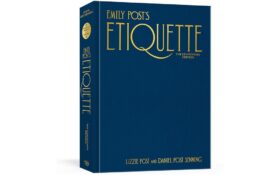 Embracing without permission. Disparaging one parent in front of children struggling with divorce. Flaunting privilege. Being a bad listener or, worse, a terrible loser.

The world and all its interactional black holes would likely have Emily Post spewing her tea. The grande dame of all things manners died in 1960, but two of her descendants have overhauled her book of tips for the 21st century to mark the centennial of the first edition.

“I think mostly that it’s really easy to paint etiquette and manners as tools for elitism, tools for secrecy, tools for exclusion,” said Lizzie Post, Emily’s great-great-granddaughter and co-author of the latest “Emily Post’s Etiquette.”

“And when they are used that way, and they definitely can be, they are effectively useless. But when we’re using etiquette and manners as a tool for self-reflection and awareness of others, I think we’re really going to have a chance to make the world a nicer place,” she said.

As incivility has taken an even stronger hold on the culture, the newfangled book encourages patience and humility in talking over difficult subjects. That, it notes, requires “getting comfortable with the idea that your brilliant remark could go unsaid.” The book also pleads for grace in losing and a “good apology,” avoiding the word “if” to neutralize the effort, or “but” to dig your hole deeper.

Emily published her first version of the book under a different title in 1922 after making a name for herself as a novelist and travelogue writer. It’s been freshened through the decades, but the 20th edition out in October is a comprehensive update.

There’s plenty of advice on setting tables, dressing for different occasions, and basic courtesies on things like gifting, tipping and greetings. But Lizzie Post, and her cousin and co-author, Daniel Post Senning, have taken on issues far more crucial. They’ve done it in part by crowdsourcing, including ideas from callers to their Awesome Etiquette podcast.

And they did it in the middle of a pandemic and the #MeToo movement, both recognized in subjects like optional handshakes, or seeking permission to hug or kiss on the cheek.

“The hug is such an intimate gesture that, for some, an unwanted one can feel like a violation,” the new book notes in part. “When someone doesn’t ask, pushes for one, or even forces it, they’re communicating that because they think it’s okay, they get to press their body against someone else’s. Depending on how it’s done, it can cross over into sexual harassment or assault.”

Not exactly groundbreaking, unless written under the name of Emily Post.

Emily herself was born into East Coast privilege, growing up in Baltimore and New York City. Her father was a prominent architect for the rich, who designed the enclave of Tuxedo Park, New York, and her mother was the daughter of a coal baron.

Emily met her husband, Edward, at a Fifth Avenue ball. There was scandal involving his romantic dalliances with chorus girls and actresses, resulting in a divorce announced in 1906, according to a biographer and reports at the time. Her inner circle attempted to secure her privacy after that, and her descendants have some wise words for friends and family offering sympathy today in divorces and separations.

“Avoid trying to push or suggest the right decision for a friend,” the Posts write in the new book. “It’s especially important to be careful what you say around children whose parents are separated or divorcing. Cheering the news or making negative comments is unnecessary.”

The book takes on other losses often left unaddressed in Emily’s time, such as grieving a miscarriage.

“You absolutely want to avoid saying things such as, `Next time it’ll happen,‘” or `This just wasn’t your time,’” the book counsels.

Through her travels, Emily learned more about the lives of those outside her social milieu. By 1922, she wrote in the first chapter of the book’s first edition, what was then called “Best Society” wasn’t a group born into great wealth or status but one comprised of “gentlefolk” who take care of each other.

“Best Society,” she wrote, “is not at all like a court with an especial queen or king, nor is it confined to any one place or group, but might be better described as an unlimited brotherhood which spreads over the entire surface of the globe, the members of which are invariably people of cultivation and worldly knowledge, who have not only perfect manners, but a perfect manner.”

Her descendants take on privilege this way: “Privilege can be and sound like many different things, but in conversation, it mostly comes across as a lack of awareness that you have benefited in a way others may not have.”

Modern-day manners on pronouns are also addressed in the new book, as a way to show “support, respect, and basic courtesy.”

“You might think someone’s pronouns are easy enough to tell just by looking at them, but the reality is this isn’t always the case,” the Posts write. “If you don’t know someone’s pronouns, and you need to know them in order to make an introduction, asking is the polite thing to do: `Joan, what pronouns do you use?′ Note that you don’t ask what pronouns Joan `prefers’ — an unfortunately common construction for this question.”

Emily was 87 when she died. Ironically, Lizzie Post said in an interview, “the older she got, the less she enjoyed participating in society. … She felt, I think, a lot of autonomy and a lot of power and a lot of agency in just being able to stay home and not have it be a big deal.”

Expanding her empire all the while with other books of etiquette.

As an only child, Emily was a “daddy’s girl,” Lizzie said, and losing her father in 1903 was a blow. Other tragedies followed. Her mother was killed in a car accident in 1909. One of her two sons, Bruce, grew up to be an architect like her father but died at 32 of appendicitis as the two worked together on a house in Martha’s Vineyard. That’s where she summered as she continued to write new books and churn out editions of her etiquette bible.

With her surviving son, Ned, she founded The Emily Post Institute in 1946, and the family still runs it today.

In print, Emily grew “more inclusive over the years,” said Lizzie. Emily’s etiquette became based more on education and merit than ideology and socioeconomic status, she said.