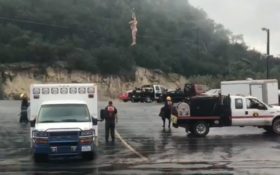 Emergency crews are set to resume searching Tuesday morning for four co-workers who disappeared when their recreational vehicle was swept away by raging floodwaters that prompted dramatic air and water rescues in a small West Texas city.

Heavy rains Sunday night caused the South Llano River to rise and largely submerge Junction, about 140 miles (225 kilometers) west of Austin. Emergency crews looked for the men Monday, but abandoned the search as darkness fell and more rain set in.

There were no other people known to be missing, Kellner said.

Right after the South Llano RV Park was overtaken with water Monday, officials were able to rescue about 40 people by throwing them life jackets or ropes. But then the water got too high and they needed helicopters and boats for the rescues.

Authorities rescued 15 by boat and four by helicopter, including, Kellner said, two people and a dog who were plucked from a tree. She said one woman floated about 18 miles (28 kilometers) down the river on debris before being rescued. She only sustained cuts and bruises.

National Weather Service meteorologist Stephen Harrison said more than 12 inches (30 centimeters) of rain has fallen in the area since Sunday and that more is expected.

“There’s still the possibility some more flooding could occur in that area,” Harrison said Tuesday, adding that the afternoon was forecast to be dry.

The RV park’s main office was also swept away, “so whatever records they had there are not accessible,” Cantu said. The RV park is adjacent to a city park where people can camp without registering, and Cantu said he doesn’t know how many people might have been staying there.

Jamie McDonald captured one of the helicopter rescues on camera outside his hotel. McDonald, also known as “Adventureman,” is an author and motivational speaker and was visiting the city as he runs across America to raise money for children’s hospitals.

McDonald said he heard people shouting and screaming and opened the hotel room door. He found people on the balcony and saw a man in the water holding onto a tree.

“There was one guy just clinging on to dear life,” he said in an interview Monday, describing the scene as “heartbreaking.” At one point, McDonald said the man became separated from a tree and it was uncertain whether he would make it out OK because the current was so strong.

“Get a hold of something,” one person says.

“God help him please,” another says.

Later, the man was hoisted up from the water by helicopter and safely lowered down to a parking lot, McDonald said. He said the man, who was naked, appeared bruised and battered.

“I can’t believe they actually rescued him,” McDonald says on the video. “That was incredible, just amazing support.”