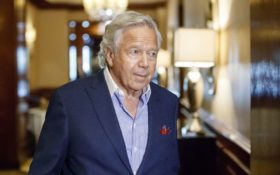 New England Patriots owner Robert Kraft’s high-profile attorneys normally don’t handle second-degree misdemeanors like soliciting a prostitute, but that’s only part of what he needs them to do.

Their main job is to make sure the public never sees videos that police say show Kraft twice paying for sex at a Florida massage parlor. On Friday, they will try to persuade Judge Leonard Hanser that police violated the 77-year-old’s federal and state rights when they secretly installed video cameras at the Orchids of Asia Day Spa. They want the videos thrown out and sealed.

“Law enforcement had no basis to suspect anything more than a run-of-the-mill misdemeanor that has never been understood, in any corner of the United States, to warrant the eye-popping invasions that occurred here,” attorney Jack Goldberger wrote in court documents. “Because we do not live in a police state and our government answers to the rule of law, suppression of the illegally-obtained evidence is the correct and essential remedy.”

In addition to Goldberger, who also represents billionaire sex offender Jeffrey Epstein, Kraft also has William Burck, a Washington, D.C., lawyer who represented former White House Counsel Don McGahn during the Mueller investigation; and New York-based Alex Spiro, who has represented high-profile athletes and celebrities, including Jay-Z, Mick Jagger and former Patriot Aaron Hernandez, who was convicted of murder and later killed himself in prison.

Palm Beach County prosecutors have replied in court documents that Kraft had no reasonable expectation of privacy at the spa in part because it was not his home or property, and that the felony case of prostitution against spa owners includes enough grounds to obtain warrants for search and surveillance of the spa.

David S. Weinstein, a Miami defense attorney and a former prosecutor not connected to the case, said Kraft’s attorneys are “raising the appropriate arguments,” but prosecutors will have a chance to rebut them in court. He said prosecutors will be able to raise the “good faith” exception to save the video — that officers had legitimate reasons to believe the warrant and their actions were legal.

He also said Hanser will rely on what the officers and the judge who issued the search warrant believed in January about the possibility of human trafficking, not what is known now.

Prosecutors say Kraft, whose estimated worth is $6 billion, twice visited Orchids of Asia in January, hours before flying to Kansas City to see his Patriots defeat the Chiefs in the AFC Championship Game. Two weeks later, they won the Super Bowl, their sixth under his ownership.

Kraft and 25 other men were charged in February with paying for sex acts. Some have accepted plea deals. Those who haven’t would benefit if Kraft succeeds in getting his videos thrown out, as their attorneys could cite the ruling. Prosecutors originally said the spa might be involved in human trafficking, but have retracted that.

Kraft has pleaded not guilty, but released a statement apologizing to Patriots fans and others for his actions. He is not expected to be in court.

Kraft’s attorneys are attacking the warrant on several grounds:

— That both the U.S. and Florida constitutions allow the secret installation of hidden cameras only under extraordinary circumstances and that Florida law specifically says secret audio recordings can only be made for serious crimes such as murder and kidnapping, not prostitution. They argue the threshold for video recordings would be even higher.

— That Jupiter police conducted an illegal search without a warrant when they enlisted a state health inspector to visit the spa and report back what she saw inside. They used her report to help get the warrant allowing the cameras’ installation. Weinstein said prosecutors will get an opportunity to show this wasn’t subterfuge.

— That detectives misled the judge who authorized the cameras’ installation by saying the health inspector had found evidence of human trafficking, but supplied no evidence such as photos of clothing or beds or other evidence that women were forced to stay there. They say detectives also failed to establish why more typical investigative methods such as sending in an undercover officer to see if he was offered sex for money wouldn’t have sufficed. Weinstein said the latter is “perhaps their weakest argument.” He said some of those techniques had been used and others would have failed to identify all the conspiracy’s participants or to gather the evidence needed.

— That the cameras weren’t necessary, as detectives already had ample evidence of prostitution at the spa before they were installed, including towels pulled from the trash and confessions of customers who had been stopped after leaving.

— That the police and prosecutors’ initial suggestions that Orchids of Asia may have been part of a human trafficking ring were an effort to “spin a yarn about how their investigation had supposedly targeted high-level human trafficking rather than low-level prostitution.”

Weinstein said whoever loses is certain to appeal Hanser’s ruling to higher courts.