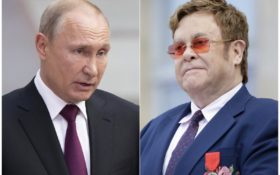 Elton John on Friday called out Russian President Vladimir Putin for saying that liberalism is “obsolete” and conflicts with the “overwhelming majority” in many countries.

In a story published by the Financial Times newspaper , Putin said “the liberal idea has become obsolete. It has come into conflict with the interests of the overwhelming majority of the population.” John said in a statement released Friday that he disagrees with Putin’s “view that pursuing policies that embrace multicultural and sexual diversity are obsolete in our societies.”

Putin also said Russia has “no problem with LGBT persons … let everyone be happy” in the interview.

John called Putin’s words hypocritical since a Russian distributor censored LGBTQ-related scenes from “Rocketman,” the film based on John’s life and career.