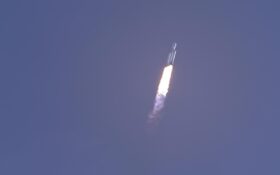 SpaceX launched its mega Falcon Heavy rocket for the first time in more than three years Tuesday, hoisting satellites for the military and then nailing side-by-side booster landings back near the pad.

Thick fog shrouded NASA’s Kennedy Space Center as the rocket blasted off at midmorning. The crowd at the launch site couldn’t even see the pad three miles (5 kilometers) away, but heard the roar of the 27 first-stage engines.

Both side boosters peeled away two minutes after liftoff, flew back to Cape Canaveral, and landed alongside one another, just a few seconds apart. The core stage was discarded at sea, its entire energy needed to get the Space Force’s satellites to their intended extra-high orbit.

This was SpaceX’s fourth flight of a Falcon Heavy, currently the most powerful rocket in use. The first, in 2018, launched SpaceX chief Elon Musk’s red Tesla convertible; the next two Heavy launches followed in 2019, lifting satellites.