Elizabeth Warren STUNNED when she found out... (ouch!) - The Horn News 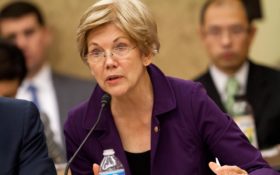 It’s no secret that Massachusetts Sen. Elizabeth Warren, Democrat, has plans to run for president in 2020.

But the latest polling news may have Warren rethinking her ambitious goal to take on President Donald Trump.

Warren released the DNA test as part of her election campaign, hoping for a boost among liberal voters after she proudly declared herself approximately 1/1064th Native American, and therefore a minority candidate.

After the Cherokee Nation came forward with a scathing condemnation of Warren’s claims to Native ancestry, public opinion has shifted quickly against the Democratic senator.

49 percent of voters said they didn’t care either way.

A whopping 24 percent — almost one-in-four voters — said that Warren’s campaign ad has made them think of her unfavorably.

This isn’t the first poll that shows that Warren is climbing an uphill battle heading into the 2020 presidential election.

Her national image has already been tainted by years of scandals and a hard-left line.

But without the support of liberal voters, Warren’s hopes are totally sunk.