Elizabeth Warren SLAMMED for this evil comment - The Horn News 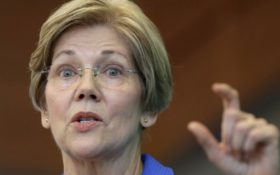 Massachusetts Sen. Elizabeth Warren made a nasty comment on Twitter Monday, and users on the social media platform weren’t shy about calling out her hypocrisy.

Warren tweeted a video of her talking about a baby named Peter who relies on Medicaid to pay for the treatment that keeps him alive.

But she clearly didn’t think this one through. In an attempt to make an argument for Medicaid, Warren said, “Every Senator — no matter the party — should step up and fight for the millions of babies like Peter who can’t speak for themselves.”

Either Warren forgot — or doesn’t care — that she’s an advocate for the abortion providers that murder of millions of babies every year that can’t speak for themselves.

She is a huge proponent for Planned Parenthood, and has spoken extensively against the proposal to roll back funding to the controversial abortion organization.

Now that  it’s politically convenient, she cares about the lives of babies?

Every Senator – no matter the party – should step up and fight for the millions of babies like Peter who can’t speak for themselves. pic.twitter.com/YiSc3GedAw

Twitter users attacked, calling her out for the evil statement.

They can't speak in the womb also, are you going to finally protect them there too!!??

So you're saying that babies should not be murdered by planned parenthood? That's step in right direction!

You support the murder of innocent fetuses though (Planned Parenthood)

Elizabeth Warren has yet to respond to the controversy surrounding her tweet.