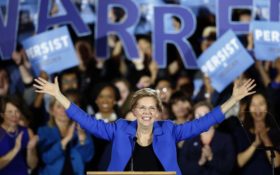 Massachusetts Sen. Elizabeth Warren announced her opposition to a revamped North American trade agreement with Canada and Mexico, arguing that it doesn’t do enough to stop the “serious and ongoing harm NAFTA causes for American workers.”

Warren, a potential presidential candidate, said she will vote against the U.S.-Mexico-Canada agreement unless President Donald Trump revises it.

“We need a new approach to trade and it should begin with a simple principle: Our policies should not prioritize corporate profits over American paychecks,” Warren said. “That should be true for NAFTA and true for every deal we cut.”

Her remarks came just a day before the United States, Mexico and Canada are set to sign the replacement for the North American Free Trade Agreement at the Group of 20 summit in Buenos Aires, Argentina.

During the 2016 presidential campaign, Trump criticized NAFTA and vowed to cancel it. But Warren’s remarks Thursday illustrate the political difficulties that Trump may face getting Congress to sign off on it as many Democrats are calling for changes.

Though Warren has yet to enter the 2020 race, it’s clear that trade could then be an animating issue as it was in 2016 when Hillary Clinton was pushed to reject the Trans-Pacific Partnership trade pact that she supported as secretary of state.

Warren also addressed the 17-year war in Afghanistan, saying that the current strategy is not working and that the United States should help the Afghans “reach a realistic peace settlement that halts the violence and protects our security.”

She did not say though at what pace she would support withdrawing from Afghanistan or under what conditions.

As recently as last week, Trump said that the United States was in “very strong” peace negotiations, but also indicated that he had little confidence that those talks would succeed.

While Warren’s speech served as a vehicle to showcase her foreign policy credentials and populist rhetoric, she also directly challenged Trump for aligning himself with, as she put it, authoritarian regimes and embracing dictators.

“The time for holding back is over. Patriots of every political persuasion must stand up to this type of behavior,” Warren said. “Americans must demonstrate to this president and to the world that we are not sliding toward autocracy – not without a fight.”

While she made no declarations of whether – or when – she might enter the presidential fray, Warren made a less-than-subtle nod to the place she would hold if she were to challenge Trump and win.

“Fifty-five years ago, when President John F. Kennedy spoke here at American University, he said that, ‘our problems are manmade – therefore, they can be solved by a man,’” she said. “The same is true to day.

Barely missing a beat, she added: “OK, I’d add that they can also be solved by women, too.”