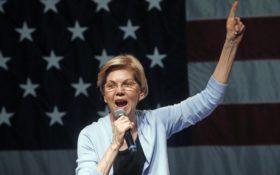 Sen. Elizabeth Warren, D-M.A., is breaking historic records in her race to be the most absurd Democrat in the 2020 race.

She’s proposing a $640 billion dollars spending program that will pay off voter’s debts, as well as eliminate tuition for all two and four-year collegiate programs.

To say it’s ambitious isn’t nearly enough to describe the plan, written out in detail on a blog. Critics call it unrealistic and incredibly expensive.

“It’s a problem for all of us,” she said. “It’s leading fewer people to start businesses. It’s forcing students to drop out of school before getting a degree.”

Here’s her plan to get rid of the debt:

For an American household making less than $100,000, each eligible person could have up to $50,000 in student loan debt wiped away, thanks to taxpayers.

Smaller amounts of student loan debt relief would be available for household incomes between $100,000 and $250,000.

Americans making more than $250,000 in a household would not be eligible for aid, Warren said.

“Once we’ve cleared out the debt that’s holding down an entire generation of Americans, we must ensure that we never have another student debt crisis again,” she wrote.

How does she propose to pay for this $600+ billion dollar plan?

Raising taxes on the “ultra-rich,” of course.

Warren’s proposals such as free college and complete economic overhaul is dangerous, economists say. And her harshest critics say it’s a lie only meant to appeal to far-left voters.

She’s badly behind in the polls — barely cracked top three in her own home state.

As the race for the Democratic nomination ramps up, Warren knows her campaign could be packing it in early if she doesn’t get a boost.

So Warren is making a lot of promises. They reek of desperation.

And it seems that voters are paying her no mind.