Elizabeth Warren couldn't sleep after she read THIS (ouch!) - The Horn News 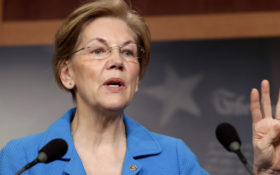 Sen. Elizabeth Warren thought she was wildly popular in her left-leaning home state of Massachusetts — but a new poll released late Thursday may have caused a sleepless night for the ambitious Democrat that wants the Oval Office for herself.

Voters in her home state are sick and tired of her antics… and don’t want her to run for president,  The Boston Globe reported.

A new poll finds Bay State voters have a blunt message for Warren when it comes to a possible 2020 campaign against President Donald Trump:

A solid majority of Massachusetts voters – close to 60 percent – believe Warren should sit out the presidential election.

“This was a shocking finding to me, given that Democrats like her so much, and she has been making moves to run for president,” David Paleologos, director of the poll, told the Boston Globe. “I would have expected her to be leading this list of potential Massachusetts presidential candidates.”

How bad are her numbers?

They’re so bad that even a scandal-plagued has-been is trouncing her among Massachusetts voters.

John Kerry, former senator and secretary of state, was trounced by 3 million votes in 2004 by President George W. Bush. He later served as secretary of state, and now has been accused of cozy back-channel ties to the extremists who run Iran, secretly working to undermine Trump and rescue the ugly deal he negotiated with the brutal Islamist regime.

Yet he’s BEATING Warren in this poll!

Just 32 percent of the voters polled said Warren should run for president, compared to 33 percent for Kerry.

Given that Kerry’s days as a relevant figure in politics are clearly behind him and Warren has been desperately trying to promote herself as a presidential hopeful, those are some pretty bad numbers indeed.

Also alarming for Warren: A recent poll of how potential 2020 candidates stack up against Trump aren’t exactly encouraging. She trails stale names such as Joe Biden and Bernie Sanders.

And while she finishes ahead of Trump – barely – that’s not exactly a plus when you consider it’s from blue state voters… a place where Hillary Clinton also consistently polled ahead.

We all know how that turned out.

It’s not all bad news for Warren; there is almost no chance she will lose her reelection bid with polls showing her lead over Republican challenger Geoff Diehl is as high as 36 points.

But the politician dismissed as “Pocahontas” by Trump should probably keep her ambitions closer to home in 2020.

As National Journal’s John Kraushaar wrote last week, longtime Democratic players are being bounced from the party in primaries that favor younger and more diverse candidates.

There’s a “limited audience for a white progressive (like Warren/Sanders) outside of a narrow ideologically-driven base,” at this point, he noted, which means the Massachusetts senator likely has no path to winning the Democratic presidential primary.

Given that a booming economy and rising poll numbers show Trump is on an easy path to reelection, maybe it’s better for her to stick to Massachusetts.