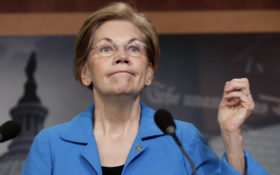 While Massachusetts Sen. Elizabeth Warren, Democrat, was preparing to fight the confirmation of Supreme Court Justice Brett Kavanaugh last month, she was also asking for illegal donations from her supporters — and critics say it was the same as soliciting bribes.

And she didn’t act alone.

FACT submitted a formal complaint to the Senate Ethics Committee on Monday regarding Warren and Harris’ allegedly illegal actions.

Senate ethic rules strictly forbid elected officials from “cashing in” on their votes before they happen. But that didn’t stop Warren and Harris from reportedly soliciting thousands of voters for cash in exchange for their vote, FACT claimed.

Warren denied any knowledge of her campaign’s allegedly illegal fundraising efforts, and acted surprised when told there was an ethics investigation into her actions during a recent debate.

Her name was signed at the bottom of the email in question.

“Something that we found out recently that is pretty unconscionable is that Sen. Warren was fundraising illegally using the vote on Justice Kavanaugh — the confirmation vote — to try to raise money for her campaigns,” Republican senatorial candidate Geoff Diehl, who is running against Warren, said during a recent debate.

“That is something you should not be doing when we are having a national discussion about the Supreme Court … but you did, and turns out it’s illegal,” he said.

A formal criminal investigation into the fundraising tactics of both Warren and Harris could be ordered based on the complaint.

“Ms. Warren’s email said she was demanding a delay on the judge’s confirmation vote and asked for donations for her 2018 election campaign, while Ms. Harris’s emails detailed several of her actions as a member of the Judiciary Committee, including her questioning of the president’s pick for the high court, and asking for contributions,” The Washington Times reported.

Asking for money upfront as a measure of support for a senators vote?

Warren attempted “to gain considerable campaign income as well as important donor information by promising to use their official position as a Senator,” said Kendra Arnold, executive director of FACT.

“This is a clear violation of the Senate Ethics rules which safeguard against the appearance or actuality of elected officials ‘cashing in’ on their official position for political purposes,” Arnold said.

In light of these accusations, do you trust Elizabeth Warren?