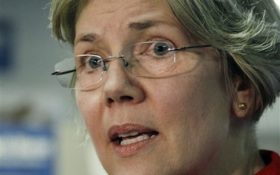 “This crisis didn’t happen overnight,” Sen, Elizabeth Warren, D-M.A. said on the Senate floor last year. “It happened because the biggest drug companies in the country pushed powerful and addictive pills, lied about how addictive those pills were and made billions of dollars doing it.”

“I think it’s time to start holding these companies accountable.”

The Wall Street Journal reported that Warren took thousands from the infamous Sackler family — whorun the pharmaceutical company that produces the widely abused drug Oxycontin. And conveniently, Warren released a $100 billion plan to combat the opioid crisis the same day that WSJ published the article.

Warren even attacked the Sackler family directly by name — even though she took the families’ opioid money.

“This crisis has been driven by greed, pure and simple,” she wrote. “If you don’t believe that, just look at the Sackler family.”

“That’s the America we deserve,” Warren said. “An America where when people like the Sacklers destroy millions of lives to make money, they don’t get museum wings named after them, they go to jail.”

Yet she was willing to cash their checks and say thanks?

But none of this should come as a stunner, of course. Warren usually bashes big money in public — then proceeds to accept money from that same giant corporation.

Her campaign promises have been built on mass attacks of special interest groups, financial, and mega tech companies.  But Warren always has her fingers crossed behind her back.

Various Google, Facebook and Amazon employees all donated a total of nearly $100,000 for 7 years.

And just last year she took more than $5,000 from special corporate interest group, Bain Capital and Rasky Partners, which both operate in Warren’s jurisdiction of Massachusetts.

Her campaigning tactic — lie like pinocchio and confiscate the cash — isn’t helping Warren in the polls. She’s been working so hard to cover her tracks by lying to her voters, but it doesn’t seem to be paying off in the slightest.

Most polls don’t paint a bright outlook for her.

So perhaps the American people are holding her accountable.

The first step is making sure she doesn’t get elected.