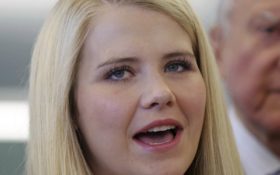 A woman convicted of helping a former street preacher kidnap then-Utah teenager Elizabeth Smart from her Salt Lake City home in 2002 refused to attend a hearing Tuesday before the state parole board that could have helped her get out of prison earlier.

Wanda Barzee, 72, also recently refused to take a psychological evaluation she would need to undergo to get out before her scheduled release in January 2024, said Angela Micklos, a member of the Utah Board of Pardons and Parole. She ran the brief hearing at the state prison in the Salt Lake City suburb of Draper.

Smart’s abduction from her bedroom at knife-point by a man who came in through an open kitchen window triggered waves of fear among parents everywhere. The frantic search for Smart and the mystery about who took her captivated the nation.

She was found nine months later while walking with Barzee and the former street preacher, Brian David Mitchell, on a street in the suburb of Sandy by people who recognized the couple from media reports as a suspect in Smart’s kidnapping.

Smart, now 30 and married with two children, has since written a book about the harrowing ordeal and recently helped make a Lifetime movie and documentary about the crime and her life. She is now a child safety activist who regularly gives speeches.

She didn’t attend the hearing Tuesday. But her father, Ed Smart, said his daughter has moved on and will accept Barzee’s eventual release. His daughter will leave it up to mental health professionals to make sure Barzee isn’t a menace to society, he said.

Ed Smart said he’s not worried for the safety of his daughter or his family but said he has concerns for others. He said Barzee’s refusal to attend the hearing or take the psychological exam seems to indicate she had the same mindset when she kidnapped his daughter and held her captive.

“It’s Barzee as usual,” Ed Smart said. “I would hate for her to have the opportunity to do that again to someone else.”

Before the kidnapping, the Smart family had paid Mitchell to do handyman work at the house after running into him in downtown Salt Lake City and thinking he was just a man down on his luck.

Barzee was transferred from federal prison to Utah state prison in 2016 to serve her time for an aggravated kidnapping charge, said Greg Johnson, spokesman for the Utah Board of Pardons and Parole.

Barzee’s attorney at trial, Scott Williams, said after the hearing that he believes his former client should be released because she has served the agreed-upon years as established in a plea agreement. Johnson said officials will review the court records to assess that claim.

Williams said he hasn’t been in touch with Barzee for about a year and doesn’t know why she didn’t attend the hearing or take the psychological examination. He said she has been diagnosed with several mental illnesses.

Though Barzee didn’t show up, the parole board will still take her case under advisement and issue a decision in the next two to four weeks, Johnson said. She was denied early release after her last parole hearing in 2011.

Barzee’s refusal to take the psychological exam or attend the hearing leaves her and the board “guessing about what her status is,” Micklos said.