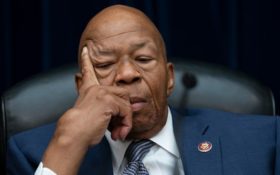 Baltimore Police are investigating a home invasion of Cummings house in Baltimore that was broken into early Saturday morning.

The burglary occurred around 3:40 a.m. in the 2000 block of Madison Avenue, local station WJZ reports. There is no report on whether any property was stolen.

Cummings home was robbed just hours before Trump made a tweet that outraged the left when he suggested the area was “infested” with crime and rodents.

Democrats criticized Trump’s remarks as insensitive and politically incorrect, despite Cummings himself having called the area “drug-infested” in the past. Sen. Bernie Sanders, I-V.T., called Cummings’ Baltimore district a “third-world country” in 2015.

Trump hasn’t backed down on his criticism.

“Baltimore’s numbers are the worst in the United States on Crime and the Economy,” Trump said Monday. “Billions of dollars have been pumped in over the years, but to no avail. The money was stolen or wasted. Ask Elijah Cummings where it went. He should investigate himself with his Oversight Committee!”

At a campaign rally in Cincinnati on Thursday, Trump again criticized Democrats for their mismanagement of inner cities.

“No one has paid a higher price for the far-left destructive agenda than Americans living in our nation’s inner cities,” Trump said, drawing cheers in the packed arena.

When he heard about Cummings home break-in, Trump tweeted —

Really bad news! The Baltimore house of Elijah Cummings was robbed. Too bad!

What are your thoughts? Did Trump go too far in his criticism of Cummings district?

Did Donald Trump go too far?