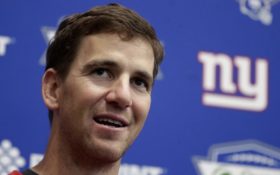 Jury selection is scheduled to begin on Monday in a New Jersey memorabilia dealer’s lawsuit that accuses New York Giants quarterback Eli Manning of conspiring with the team’s equipment staff to sell bogus “game-used” helmets to unsuspecting collectors as part of a long-running scam.

Barring a last-minute settlement, the two-time Super Bowl-winning quarterback could take the witness stand to defend himself against the explosive allegations as early as next week.

Manning and the team have denied the claims, and have characterized lead plaintiff Eric Inselberg as a scam artist who sold fake memorabilia himself over a span of several years. Manning’s attorneys also have described Inselberg’s lawsuit as “inflammatory and baseless,” and have accused Inselberg’s attorneys of using underhanded tactics to whip up a media frenzy against their client.

Inselberg filed the lawsuit in 2014. It says that two helmets purchased by Inselberg and two other plaintiffs — including one purportedly used by Manning during the Giants’ 2007-2008 Super Bowl season — were bogus. Inselberg says photographic experts using a technique called “photomatching” could not find evidence that the helmets were ever used in games.

The Giants and Manning contend photomatching is unreliable because it does not take into account that helmets are routinely reconditioned during or after a season, the evidence of which might be found on the inside of the helmet and not the outside.

The stakes were raised in the lawsuit in April 2017 when Inselberg’s attorneys filed court documents that contained emails between Manning and equipment manager Joseph Skiba, who also is a defendant in the lawsuit. In one email, Manning asks Skiba to get “2 helmets that can pass as game used.”

The email does not refer to the two helmets at issue in the lawsuit, but Inselberg alleges it indicates a pattern of fraud. In a court filing last week, Inselberg’s attorneys wrote they would introduce evidence during the trial that would “show that Manning engaged in a pattern of knowingly providing items to Steiner Sports that he misrepresented as having been game-used when he knew they were not.”

When the emails went public last year, Manning angrily denied any wrongdoing. In a court filing this month, Manning’s attorney wrote that the email was intended to ask Skiba for two game-used helmets that would “satisfy the requirement of being game-used.”

In the same court filing, Manning’s lawyer accused Inselberg of being “engaged in a decades long memorabilia scheme” in which he obtained, without permission, game-used Giants equipment, including Manning’s, from Skiba and Skiba’s brother, Ed, as well as a local dry cleaner.