Elephants fight forest fire (you’ve got to see this!) - The Horn News 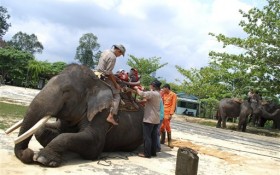 Forest fires difficult to control? Call in the pachyderm patrol.

Officials in Indonesia are using trained elephants outfitted with water pumps and hoses to help control fires that have claimed vast amounts of forest while sending thick haze into neighboring countries.

For nearly three months, Riau province in East Sumatra has been blanketed by smoke from forest fires and land clearing, especially in peat-rich areas where flames are difficult to contain.

At the elephant conservation center in Siak district, 23 trained elephants are being used as “forest watchdogs.” 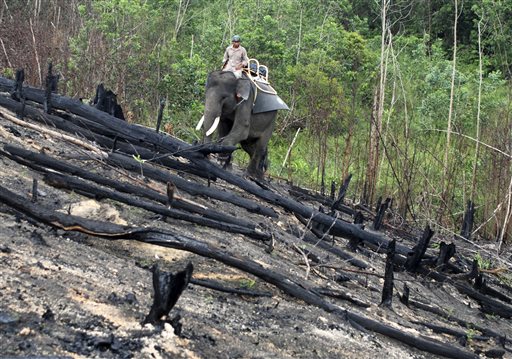 Carrying water pumps and other equipment, elephants and their crews patrol burned areas in the national forest to ensure that fires don’t reappear after smoldering beneath the peat lands.

Supartono, the head of the Riau Forestry Division, who uses one name, said the elephants had earlier been trained to help patrol forests to find people encroaching illegally, as well as to resolve frequent conflicts between wild elephants and people by driving the wild elephants that enter human settlements back to their habitats.

So far, Indonesia has been unable to put out the raging fires this year because of intentional burning and a rain shortage.

Much of the forest land that was burned in the past 17 years was converted into oil palm and pulp plantations. 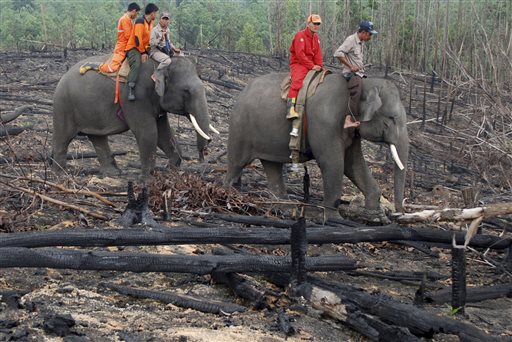 Data from the Riau Forest Fire Prevention Taskforce show more than 10,000 hectares (25,000 acres) of forests and land have been burned in the province.

Environment and Forestry Minister Siti Nurbaya says about 1.7 million hectares (4.2 million acres) of forests and plantation land have been razed by fires throughout Sumatra and Borneo.