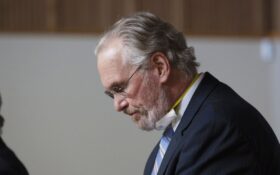 Pacific Gas & Electric confessed Tuesday to killing 84 people in one of the most devastating wildfires in recent U.S. history during a dramatic court hearing punctuated by a promise from the company’s outgoing CEO that the nation’s largest utility will never again put profits ahead of safety.

PG&E CEO Bill Johnson made the roughly 170-mile (275-kilometer) journey from the company’s San Francisco headquarters to a Butte County courthouse to plead guilty to 84 felony counts of involuntary manslaughter stemming from a November 2018 wildfire ignited by the utility’s crumbling electrical grid. The blaze nearly wiped out the entire town of Paradise and drove PG&E into bankruptcy early last year.

Besides the mass deaths it caused, PG&E also pleaded guilty to one felony count of unlawfully starting a fire as part of an agreement with District Attorney Mike Ramsey.

As Butte County Superior Court Judge Michael Deems read the names of each victim, Johnson acknowledged the horrific toll of PG&E’s history of neglect while solemnly staring at photos of each dead person shown on a screen set up in the courtroom.

“No words from me could ever reduce the magnitude of that devastation or do anything to repair the damage,” Johnson said in a statement afterward. “I hope the actions taken today bring some measure of peace.”

He also assured the judge that PG&E took responsibility for all the unnecessary devastation that it caused “with eyes wide open to what happened and to what must never happen again.”

Johnson was hired about six months after the so-called Camp Fire and plans to step down as CEO on June 30 when PG&E hopes to have won court approval for its plan to get out of its second bankruptcy case in 16 years. A mostly new board of directors recently announced by PG&E as part of a deal with California will hire his replacement.

The extraordinary court hearing was set up to publicly shame PG&E for past practices that emphasized boosting profits to keep investors happy instead upgrading and maintaining its crumbling equipment to protect the 16 million people who rely on the utility for power.

Many of the fire’s victims were elderly or disabled. They took desperate measures to save themselves.

Dennis Clark, Jr., 49, was found in the passenger seat of a car his 72-year-old mother was driving. Their car was in a line of three other vehicles with bodies of victims in each one.

Sara Magnuson, 75, was found inside her home, wrapped in a wet carpet in the bathtub in a futile attempt to save herself.

“These 84 people did not need to die if PG&E had done its job in a reasonable way,” Ramsey said during an hour-long press conference that included showing off some of the nearly century-old parts that the utility allowed to decay on its power lines leading up to the Camp Fire.

More than 20 family members of the people killed are expected to make statements in court Wednesday.

Christina Taft, whose mother Victoria Taft, 67, died inside their Paradise home, said she couldn’t bear to be there in person Tuesday but watched it on YouTube. To Christina Taft, 26, the public plea of guilt didn’t feel like enough.

“As far as actual change, to save lives, that is not happening. I just feel like it’s not ended,” said Taft, who moved away from the area after the fire and said she “can’t handle going back into Butte County ever again. It doesn’t feel safe.”

Deems is expected to formally sentence PG&E either Thursday or Friday, though no one will be imprisoned for the company’s crimes.

PG&E has agreed to pay a maximum fine of $3.5 million in addition to $500,000 for the cost of the investigation. The San Francisco company won’t be placed on criminal probation, unlike what happened after its natural gas lines blew up a neighborhood in San Bruno, California, killing eight people in 2010. That tragedy resulted in a criminal conviction that put PG&E on a five-year probation that ends in January 2022. The San Bruno convictions didn’t include homicide charges, unlike what happened in the extraordinary case brought against PG&E in Butte County.

“It is a modicum of justice,” Ramsey said of Tuesday’s guilty pleas while expressing with his inability to seek harsher penalties. “It isn’t perfect justice, but we don’t have a perfect system.”

Ramsey predicted Butte County’s exhaustive investigation will lay the foundation for imprisoning members of PG&E’s future management team if the utility doesn’t live up to its promises. “They are on notice,” he said. “The excuses are gone.”

The proceeding unfolded as PG&E approaches the end of a complicated bankruptcy case that it used to work out $25.5 billion in settlements to pay for the damages from the fire and others that torched wide swaths of Northern California and killed dozens of others in 2017. The bankruptcy deals include $13.5 billion earmarked for wildfire victims. A federal judge is expected to issue a final decision on PG&E’s plan by June 30.

Ramsey tore into PG&E shortly after releasing a summary of a scathing grand jury indictmentdetailing the corporate misconduct that led to the 2018 wildfire. Before the report came out, Johnson indicated in court that the findings won’t say anything PG&E doesn’t already know.

“Our equipment started that fire,” Johnson ruefully acknowledged. ”PG&E will never forget the Camp Fire and all that it took away from the region.”