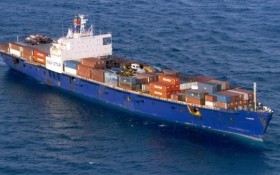 The National Transportation Safety Board said on Twitter that the survey of the site will continue.

The El Faro sank in about 15,000 feet of water Oct. 1 during Hurricane Joaquin east of the Bahamas. There were 33 people aboard but no survivors were found.

Crews sent down a remotely operated vehicle to confirm the wreckage after sonar images picked it up on Saturday. The U.S. Navy will continue searching the wreck site and debris field on Tuesday with the vehicle and its underwater video cameras.

The “black box” is vital in understanding the final moments of the ship. It will include the audio during key decision-making moments, and comments from the captain and others about the state of the ship.

The El Faro’s captain, Michael Davidson, had called in before the vessel disappeared saying the ship had lost its engine power during its voyage from Jacksonville to Puerto Rico. He said the ship was taking on water and sent out three different distress signals.

The Coast Guard spotted one body floating in a survival suit during its search in the days after the boat’s disappearance, but there have been no traces of others.

Deb Roberts of Jay, Maine, the mother of El Faro engineer Michael Holland, said the positive identification of the cargo ship “was like losing Mike all over again.”

Four families so far have filed lawsuits against the ship’s owner, Tote Marine, and its captain, Michael Davidson. They allege the company failed to maintain the aged ship properly, and made decisions to sail with a strong storm brewing offshore that imperiled the lives of the crew.

Tote Marine defended itself in a complaint filed last week in U.S. District Court. The company is asking a judge to release it from liability, or to contain it.

“Prior to commencement of the voyage and at all times, plaintiffs exercised due diligence to make the S.S.El Faro seaworthy in all respects and to equip and supply (the vessel) with suitable engines, machinery, apparel, appliances, personnel, and other appropriate and necessary equipment, all in good order and condition and suitable for their intended purposes,” the company’s attorneys wrote.