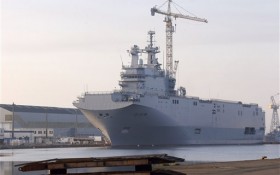 In a surprise to some military analysts, Egypt has just agreed to their second major military purchase this year from France. The North African country has agreed to buy two assault ships from France, the French government said Wednesday, dramatically increasing Egypts capabilities on- and off-shore.

The assault ships, which can each carry 16 helicopter gunships, 700 troops and up to 50 armored vehicles, were originally intended for Russia. France continued building to Russia’s specifications — including stenciling Cyrillic writing throughout the vessels — until the deal finally fell apart because of the Ukrainian crisis. It was originally supposed to be the biggest arms sale ever by a NATO country to Russia.

Russia had traditionally supplied Egypt’s military, but the country has turned more recently toward Western arms purchases, with France taking a leading role.

Although the terms of the contract weren’t released, analysts said it was unlikely that Egypt would re-sell the ships to Russia given the increasing value of its relationship with France.

The Egyptian government has been battling a long-running insurgency in the northern Sinai region, which escalated after the military ousted Islamist President Mohammed Morsi in July 2013 amid massive protests against his rule, and cracked down on Islamic groups. A local Islamic State affiliate has been claiming responsibility for militant attacks in the area.

Peter Roberts, a senior research fellow at the Royal United Services Institute and a former Royal Navy officer, said Egypt’s military is shifting its focus, previously focused on the Sinai, to a more regional outlook.

“It does provide an interesting window into the decision-making of Egypt’s leaders at this moment,” he said.

Analysts said the purchase showed Egypt’s attempt to take a more muscular role in the region, notably with the disintegration of Yemen and Libya.