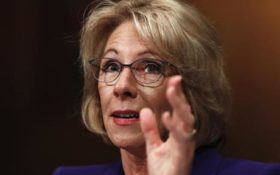 The Senate historian says it was the first time a vice president had to break a tie on a Cabinet nomination.

Two Republicans joined Democrats Tuesday to vote to derail DeVos’ nomination, a move critics say was influenced by the thousands of dollars of donations they’d received by teachers unions.

But proponents for charter schools and voucher programs believe they give disadvantaged children a chance to receive a better education.

Democrats cited DeVos’ financial interests in organizations pushing charter schools to support their opposition, but DeVos has said she would divest herself from those organizations.

In an earlier tweet, President Donald Trump wrote “Betsy DeVos is a reformer, and she is going to be a great Education Sec. for our kids!”

DeVos, a wealthy Republican donor and longtime school choice advocate, has emerged as one of Trump’s most controversial Cabinet picks.

Trump stood behind his nominee, accusing Democrats of fighting progress and change.

“Senate Dems protest to keep the failed status quo,” Trump tweeted Tuesday before the vote. “Betsy DeVos is a reformer, and she is going to be a great Education Sec. for our kids!”