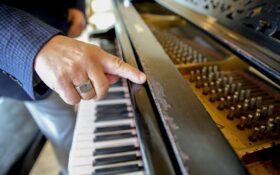 Hard of hearing, Thomas Edison found a unique way to appreciate piano music. As someone played, the great inventor would lean in close to the instrument, right above the keys, and he’d bite the piano.

Pressing his teeth into the wood of phonographs and pianos helped Edison experience the vibrations in his skull. Or in his own words, it allowed him to “hear through my teeth.”

Robert Friedman recently showed off marks on a Steinway grand piano once owned by Edison — a cluster of shallow indentations roughing up the black lacquer above the keyboard. Friedman, who buys and sells Steinways, purchased the piano last year and says he was surprised by the toothy signatures left by the inventor of the phonograph. He’s now looking for the right home for the novel historical artifact.

“I believe that it belongs somewhere where many, many, many people can see it,” Friedman said.

Edison bought the Model “B” Ebony from Steinway & Sons in 1890 for $725. Paperwork with the sale includes the handwritten notation “office furniture,” indicating it was sent to his lab in New Jersey. The piano “for some reason unknown to me it gives better results than any so far tried,” Edison wrote the company. “Please send bill with lowest price.”

Edison invented the phonograph in 1877. When he bought the piano 13 years later, he was experimenting with sound recording. Edison owned the instrument for decades, so it’s possible it was used in early recordings.

So did Edison’s teeth make those marks?

There’s no known old black-and-white photo of Edison chomping this piano to prove it. But he was known to bite into phonographs and pianos to help him experience music as his hearing faded. His daughter once recalled a guest weeping at the sight of Edison clamped on to a piano as someone played it.

“I hear through my teeth, and through my skull,” said Edison, as quoted in Edmund Morris’ 2019 biography. ”I bite my teeth into the wood and then I get it good and strong.”

The formulation is simple for Friedman: Those are tooth marks, and who else would have bit the piano?

“I’ve probably had my hands on a few thousand Steinways in the last 50 years,” Friedman said. “I’ve never seen that anywhere.”

Friedman bought the piano for about $45,000, sight unseen, in early January 2021 as part of an estate sale on Long Island. Friedman didn’t notice the marks at first.

His friend Charles Frommer, a musician and recording history enthusiast, came to Friedman’s house in New York’s Hudson Valley to tune the piano, noticed the indentations and told him “those are Edison’s bite marks.”

Friedman, who calls himself the Steinway hunter, finds and buys the high-end pianos from people and then sells them, usually to dealers or rebuilders. But this one is more complicated.

Given this piano’s historic association, he doesn’t want it to go back into private hands. He has yet to find an appropriate historic site that would buy the piano, which he is offering for what it cost him.

The Thomas Edison National Historical Park in West Orange, New Jersey, passed up a chance to buy the piano from its previous owner in 2020 for several reasons, including limited space, cost and the fact that some original interior parts were replaced since Edison owned it, museum curator Jerry Fabris said in an email.

Friedman is undeterred and still looking for a home. A documentary also is possible, or having the piano recorded for a virtual instrument sample library. In the meantime, the piano has been featured at fundraisers for the Ulster County Jewish Federation at the home of friends in Woodstock who housed the instrument until recently.

And, yes Edison’s listening technique has been tested on the piano. Not wanting to mark up the instrument any further, Frommer said they tried it with wooden shims placed on the piano.

“We were able to replicate the effect,” Frommer said. “And yeah, you do hear it in your skull.”