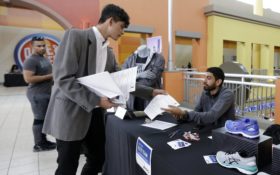 More Americans applied for unemployment benefits last week, but the increase was modest and came after applications fell to the lowest level in 44 years the previous week.

THE NUMBERS: The Labor Department said Thursday that applications for jobless aid rose 10,000 to a seasonally adjusted 233,000. Last week’s figure was the lowest since 1973. The four-week average, a less volatile measure, fell to 239,500.

The number of people receiving benefits slipped 3,000 to 1.89 million, the lowest level since December 1973.

Damage from Hurricanes Irma and Maria are still making it difficult for residents of Puerto Rico and the U.S. Virgin Islands to file claims, the government said. That suggests applications may rise a bit in the coming weeks.

KEY DRIVERS: The data signals that employers are optimistic about the business outlook and are holding onto their workers. Applications are a proxy for layoffs. Earlier this month, the government said the unemployment rate is at a 16-year low of 4.2 percent.

The economy is recovering from Hurricanes Harvey, Irma and Maria more quickly than many analysts expected. Applications had spiked to 298,000 in the wake of the storms but have since fallen back to historically low levels.

THE TAKEAWAY: Many analysts expect growth in the July-September quarter may top 2.5 percent at an annual pace. The government will release its report on third quarter growth on Friday. Any drag on the economy in the third quarter from the hurricanes will likely be reversed in the final three months of the year, economists expect.