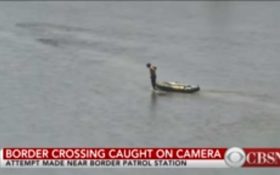 Instead what he witnessed proves exactly why the president and his supporters say we need tougher border control.

As soon as Begnaud crossed over the Texas border onto the Mexican side, he witnessed a human trafficker smuggling two people across the American border in an inflatable boat.

In broad daylight, without a care in the world.

As Begnaud notes in the video, this encounter occurred in the middle of the day, only a few hundred yards from a border checkpoint.

Hot Air reporter John Sexton pointed out that Begnaud is also the same reporter that explained the true backstory behind the viral photo of a Honduran girl crying that landed on Time Magazine’s cover.

While Begnaud was filming the smuggler using the raft to deliver illegal immigrants onto the American side, he was approached by a “scout” that threatened him stating, he was “not safe.”

The threats increased enough that Begnaud and his crew became afraid and headed back to the border checkpoint.

The illegal immigrants successfully made it onto American soil — and as the smuggler crossed back to the Mexican side, he gave the CBS “the finger.”

According to the CBS team, the illegal crossing took place during a shift change at the checkpoint, which the smuggler must have known about.

“This is an example of why the Trump administration has been pushing for a border wall,” said Begnaud.

And we could not agree more with him.