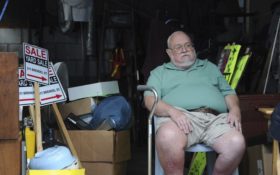 A 66-year-old Pennsylvania veteran dying from cancer has been holding yard sales to pay for a funeral this year… his own.

Willie Davis was diagnosed with stage 4 squamous cell carcinoma, and wanted to sell his possessions before he died so he had enough money to be buried next to his parents in Culpepper, VA.

After visiting his yard sale in August, two of Davis’ customers heard his story… and they’ve called on fellow American patriots to help. Answering the call, strangers from across the country have flocked to raise enough money for Davis to have the funeral and burial he is requesting.

David Dunkleberger says he and his friend Ed Sheets pulled into a yard sale in Brownstown last month. He says the man running it told him he was selling his belongings to pay for a funeral.

When asked whose funeral, the 66-year-old Davis replied: “Mine.”

“It broke your heart, hearing the story, and we just decided we had to do something to try and help him, try to make his life a little bit easier,” Sheets explained.

According to Sheets, Davis served in the Navy in the 1970s during the Vietnam War.

“He’s done a lot serving our country, so we wanted to kind of return the favor to him so that, again, his last days could be a little less hectic, a little more peaceful for him,” Sheets said.

Dunkleberger and Sheets returned to Davis’ home a day after his yard sale to ask permission to help him raise the money he needed. The two men created a GoFundMe page to “help this man and allow him to relax during his final days.”

Fox News reports that the original goal was to raise $5,000, but to meet Davis’ final wish to be buried next to his parents, the two men upped the goal to $15,000.

The two men wrote that “the remainder will go towards helping another veteran in need.”