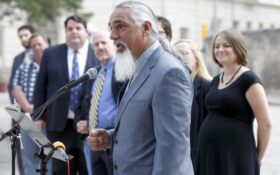 A Texas lawyer known as the “DWI Dude” has been sentenced to more than 15 years in federal prison for falsely promising Colombian drug traffickers he’d get their charges reduced or dismissed in exchange for cash, prosecutors said.

According to federal prosecutors, Balagia conspired with a private investigator in Florida and an attorney in Colombia to scam Colombian drug traffickers into paying “attorney fees” for acting as intermediaries with government officials who they said would accept bribes to dismiss criminal charges or reduce prison sentences.

There were no bribes or government officials involved.

“The evidence in this case demonstrated that Balagia had been shaking down his clients for years by claiming that he was able to purchase favorable deals from prosecutors and judges alike,” Acting U.S. Attorney Nicholas Ganjei said.

Defense attorney Gaylon Riddels had asked for probation for his client, saying that Balagia was “homeless, destitute and broken,” the Dallas Morning News reported.