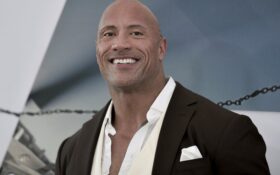 Could the man formerly known as the “People’s Champ” wind up becoming the people’s president?

Critics are speculating after a recent poll released which found that nearly the majority of Americans want Dwayne “The Rock” Johnson to run for the White House.

The poll from piplsay, discovered that 46 percent of 30,138 people surveyed said they want the wrestler-turned-movie star to run for office.

He admitted, he’d have no hesitations about running.

“Humbling,” he wrote. “I don’t think our Founding Fathers EVER envisioned a six-four, bald, tattooed, half-Black, half-Samoan, tequila drinking, pick up truck driving, fanny pack wearing guy joining their club – but if it ever happens it’d be my honour to serve you, the people.”

Perhaps he may be right, that his election would be the unthinkable.

But the premise of a celebrity figure — who’s seemingly well liked by people on both sides of the political aisle — is tempting critics to imagine how Johnson would try to bring together a country that has been divided over the past handful of years.

After all, Johnson said his goal is to unite America. And the last Hollywood actor-turned-president, Ronald Reagan, is still beloved.

A sneak peek of an upcoming interview released early Monday, with Johnson saying that he does “have the goal to unite our country,” he says. “I also feel that, if this is what the people want, then I will do that.”

“A united country, as we know, is its strongest,” he says. “I want to see that for our country.”

But for Johnson, this is no new thing.

As far back as 2018 he mentioned that he had been attending meetings to become familiar on what it would take to run for president.

“… The idea of running for president has been very flattering that a good amount of people have been wanting me to run and, honestly, it’s so flattering, but I feel like the most respectful thing I could do is just learn as much as I could possibly do.”

“To become president, that is a skill set that I feel like you have to know,” Johnson continued. “You have to put in the time — like years and years of service, so anyway, that’s where I’m at. I just want to learn as much as I possibly can.”

Is this something you want to see?

Would you cast a vote for Dwayne Johnson to be president?