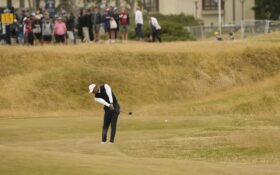 The dry conditions at the British Open turned a beautiful day for golf into a long, long slog for many of the players.

The moderate temperature and average wind Thursday on the east coast of Scotland combined to make the fairways lightning fast, which in turn made play ploddingly slow.

“It’s quite stop-start, but I think St. Andrews is that way,” said Rory McIlroy, who was two strokes behind leader Cameron Young after a 6-under 66. “There’s a lot of criss-crossing and waiting on other greens and waiting on greens to clear because (of) the drivable par 4s.”

The Old Course has many shared greens and even some shared fairways. The seventh hole, for instance, doglegs right across the middle of the 11th. Both pins are on the same green.

Even the par 5s caused a bottleneck.

“Got to 14, wait on the tee for a while,” said Max Homa, who played alongside Tiger Woods and U.S. Open champion Matt Fitzpatrick. “And then they said we were going to hit up on them, and they let us drive. So we hit our drive. Then when we got up there, we waited 20 minutes for them to hit, which meant we had to wait another 20 after that for us to hit. It was very bizarre.”

Woods finished with a 6-over 78, his second-worst round at the oldest major in golf — a tournament he has won three times. Fitzpatrick managed to birdie 18 to get back to even par, while Homa also birdied the final hole to finish at 1 over.

“It’s just a joke, isn’t it? Like 6 hours, 10 (minutes), this just shouldn’t be happening ever in golf,” said Fitzpatrick, who then tried to explain the reason for the sluggish play.

Defending champion Collin Morikawa, who won the title last year at Royal St. George’s, said he wasn’t surprised it would be slow, but he didn’t expect it to be so slow.

“We were waiting on groups at tees, waiting on fairways,” Morikawa said. “Xander (Schauffele) and I talked about it, we’re watching more golf than we ever have. You stay in the fairway, and you’re watching two other groups play golf.”

Morikawa finished at even-par 72. Schauffele was at 3 under.

Homa said the delays made it difficult for him to warm up for his next shot, calling the round “choppy” and adding it was difficult to get into a rhythm.

At least Homa has age on his side, he’s only 31. For Padraig Harrington, things were even tougher.

“It was hard going those last couple of holes, all the stopping and starting,” said Harrington, who shot a 69 and had a pizza waiting for him when he came off the 18th green. “When you’re 50 years of age, it’s hard to Rolls Royce it on every swing.”