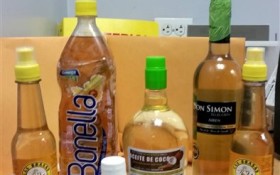 Not quite as slick as the oil he was carrying – Law enforcement officials say they busted a passenger arriving at New York’s Kennedy Airport with 11 pounds of liquid cocaine packed into oil and vinegar bottles.

Agents say they opened bottles of oil and vinegar in Leal Valle’s luggage and detected an unusual chemical odor.

Customs officials say the liquid in six bottles tested positive for cocaine. They say the total weight of the cocaine was 11 pounds and the street value was $194,000.

The case is under investigation by the Department of Homeland Security.

No information on an attorney for Leal Valle was immediately available.

Leal Valle is a citizen of Guatemala.