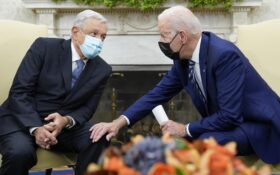 Authorities made a series of arrests of drug cartel figures in western Mexico that set off destruction of vehicles and businesses in two states in apparent reaction.

President Andrés Manuel López Obrador did not identify those arrested Tuesday in Jalisco state, but said soldiers had confronted criminals, including “bosses,” at a “meeting of two gangs.”

There was a shootout, arrests and then “this provoked protests of burned vehicles, not only in Jalisco, but also in Guanajuato,” he said.

Images circulated on social media showed men commandeering cars and buses and setting them on fire in the middle of roadways. Others showed burned out convenience stores.

Cartels often create such chaos in an effort to keep authorities from transporting cartel bosses.

Jalisco Gov. Enrique Alfaro said via Twitter that no one was injured in the destruction that followed the arrests.

The region is dominated by the Jalisco New Generation cartel, whose leader Nemesio Oseguera, “El Mencho,” is among the most sought by Mexican and U.S. authorities.

There was no indication Oseguera was present at the clash.