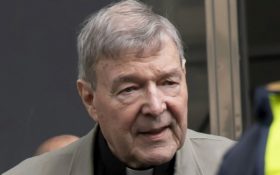 Disgraced Cardinal George Pell has been transferred from a Melbourne prison after a drone illegally flew overhead in a suspected attempt to photograph the famous inmate, a newspaper reported on Sunday.

Sponsored: The Safest, Most EffectivePain Reliever on the Market

The most senior Catholic to be convicted of child sex abuse had been transferred from the Melbourne Assessment Prison where he has been held since February last year on convictions of molesting two choirboys at the city’s cathedral in the late 1990s, the Herald Sun newspaper reported.

The move came after a drone flew over a prison garden where Pope Francis’ former finance minister is employed weeding and watering plants, the newspaper reported.

The Justice Department on Sunday confirmed “an incident involving a drone flying over the Melbourne Assessment Prison on Thursday,” but would no comment on the 78-year-old cleric’s whereabouts.

Pell had been transferred to the maximum-security Barwon Prison near Geelong, southwest of Melbourne, the newspaper reported.

Flying a drone within 120 meters (394 feet) of a Victorian prison is an offense that carries a potential two-year prison sentence. The incident has been reported to police but no arrest has been made.

Pell has been sentenced to six years in prison and is no longer a member of Francis’ Council of Cardinals or a Vatican official.

A state appeals court in August rejected the cardinal’s application to overturn the convictions in a two-to-one majority decision.

Seven judges of Australia’s High Court will hear his challenge to that decision in March. The court is Pell’s last avenue of appeal.