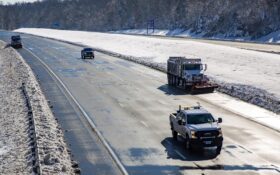 A Washington State Patrol trooper issued a $533 ticket to a driver Sunday after the person drove more than 5 miles (8 kilometers) with their vehicle and windshield almost completely covered in snow.

Trooper Heather Weatherwax said the State Patrol received a report about the person driving erratically along SR 16 south of Bremerton. When pulled over, the driver reportedly told the trooper that their windshield wipers weren’t working, Weatherwax said.

The driver received the $553 ticket for second-degree negligent driving.

Weatherwax urged people to remove all snow from vehicles before hitting the road.