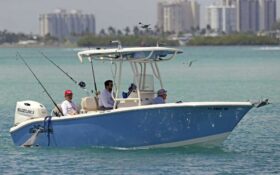 One man was injured when two boats collided in the waters off Star Island near Miami Beach on Tuesday night, officials said.

The U.S. Coast Guard said in a tweet the injured person was ejected from the boat during the collision, which happened around 9 p.m. Multiple agencies, including Miami-Dade Fire Rescue and the Florida Fish and Wildlife Conservation Commission, responded to the scene.

Miami Beach Fire then transported the man to Ryder Trauma Center at Jackson Memorial Hospital. He was reported to be in serious condition.

No additional details were available.

Fish and Wildlife officials are investigating the crash.