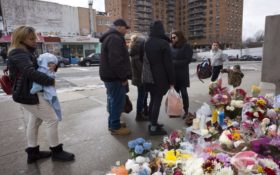 Authorities say a woman who lost control of her car and fatally struck the child of a Tony Award-winning Broadway actress and another toddler in a Brooklyn crosswalk has died of an apparent suicide.

Forty-four-year-old Dorothy Bruns was found dead in her Staten Island home Tuesday. Authorities say pills and a note were found nearby.

Bruns faced 15 years in jail after being charged with manslaughter, criminally negligent homicide, reckless endangerment and assault following the accident in March.

Authorities say Bruns had a seizure while stopped at a red light. Her car drove forward, killing Ruthie Ann Blumenstein’s 4-year-old daughter and the 1-year-old son of another parent. Blumenstein later lost her unborn child.

Prosecutors say doctors had told Bruns not to drive after she had a previous medical episode.