'Dreamers' are FURIOUS, turn against Democrats - The Horn News 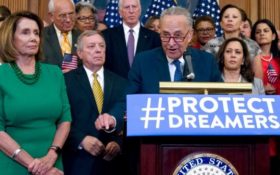 Time’s up for Democrats. It seems illegal immigrants brought to the United States as children and their political allies will not be giving them anymore free passes.

After President Donald Trump offered to negotiate, Dreamers feel failed by the liberals and will not longer accept that Republicans are to blame — they want action, not more talk about action.

Democrats like House Minority Leader Nancy Pelosi stood on the House floor for a record-breaking 8 hours in support of Dreamers, but nothing came out of it. Once again, she just wasted everyone’s time.

“They don’t walk their talk,” said Cata Santiago, a 20-year-old illegal immigrant who was brought to the U.S. from Mexico when she was just 8 years old and is protected by DACA.

“We’re tired of it. We’re tired of believing them when they say ‘It’s the Republicans.’ They make promises when they’re in an election, and when it’s over they’re done and don’t do anything.”

In fact, Republicans never were to blame.

President Donald Trump set a specific date to give Congress time to act. They failed because Democrats refused to negotiate. Trump even said he was open to a path to citizenship if liberals were willing to give. But they’re not.

He requested in return money for his wall, but no one was in Congress was willing to budge.

The crybaby liberals do not care about Dreamers, they only want to appear as if they do. If they cared about keeping the illegal immigrants in America, they would come to the table.

They only care about the votes. Santiago recognizes this, “I’ve decided to put my faith in my community [of Dreamers] and not in the Democrats,” Santiago told Fox News.

On March 5 the program that shielded Dreamers ended, and the illegal immigrants decided to show up at the Democratic National Committee headquarters and show them how betrayed they feel.

“The Democrats made the calculation to kick the can down the road and allow hundreds of thousands of us undocumented youth to live in uncertainty,” said Maria Duarte, one of the participants, in a statement. “We are anxious and we are scared of being torn away from our homes and our community.”

It gets worse for liberals.

Dreamers are urging all of their supporters to end any affiliations they may have with Democrats. They are done with liberals using them and their allies for votes and not delivering anything in return.

Members of the Seed Project, a group that advocates for undocumented immigrants said they are determined “to continue to expose the Democrats’ false promises.”

Sponsored: Is this amazing “Food of God” real?

Dreamers do not just want an extension to the problem — they want a long term fix, a permanent citizenship.

“Democrats relinquished the leverage they had for meaningful legislation,” wrote Cesar Vargas, a civil rights attorney who has advocated for immigrant causes, in an opinion piece in the Huffington Post.

Sen. Chuck Schumer is being held accountable by Dreamers. They complain that he continued to boast about a plan to continue the program, but he dropped the ball.

“Democrats have no plan, and once again, Schumer, now the minority leader, is showing that protecting these immigrants…was never his priority,” he said. “The lack of leadership by Democrats, however, is nothing new. In 2009, they controlled the White House and Congress and still failed to bring up immigration reform for a vote.”

The DNC claims that they are still the only reliable party for Dreamers. They appear to be the only ones that think that way.

DNC National Press Secretary Michael Tyler said to Fox News: “The Democratic Party is the only party that is standing with and committed to protecting Dreamers. Our Democratic President Barack Obama established DACA to provide relief for Dreamers because Congress failed to act.”

“And now, Donald Trump has rescinded DACA to pander to his base all at the expense of Dreamers,” Tyler said. “Democrats have put countless proposals on the table, and yet this president and Republican Congress refuse to take action.”

The anger and disappointment that Dreamers feel towards Democrats, critics say, is not indication that they also do not blame Republicans for an uncertain future. But, they understand that Democrats are the only party that gave them false hope.

“We’re done speaking to the Democrats behind closed doors and trusting them,” Santiago said, “everything is going to happen out in the open.”