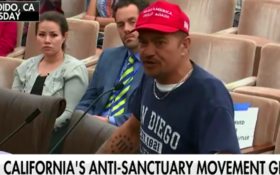 Residents in Escondido, California attended a heated meeting Wednesday in front of the city’s council to voice their opinions on the state’s sanctuary laws.

Over 60 residents gathered together to voice their arguments against the sanctuary laws — and in favor of President Donald Trump’s lawsuit against the state.

Before voting 4 to 1 in joining Trump in the fight against California’s sanctuary laws, a legal immigrant gave a passionate speech about his personal immigration story.

While wearing a “Make America Great Again” hat, a proud immigrant stood in front of the city council and said, “I speak to you as an immigrant myself.”

“Now, I now have a piece of paper hanging on my wall called a naturalization certificate that says I am a proud United States American citizen. And if I can do it, every single person that’s a dreamer in this room can do it” he concluded. “Every person that’s undocumented in this room, they can do it, too.”

At the rally, one supporter spoke out on California’s absurd sanctuary laws stating, “There is nothing in the Constitution that says that one rogue state can make policies that affect the whole nation.”

Ultimately, the city council voted in favor of joining Trump’s lawsuit and the mayor of Escondido was proud of what his city achieved.

“This is the right thing to do,” Mayor Sam Abed said Wednesday. “I was elected mayor to uphold the Constitution and to keep our community safe. I am committed to do that, and that’s what the council did today.”